Ministry, Wife and Mom life… bring it on.

Then They Were Boys… 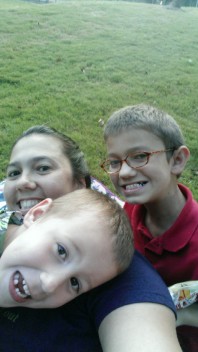 We didn’t find out the gender of either of our kids. I remember sitting with my mom looking at baby things, and her saying “What if its a boy?” I had a momentary sense of panic. I’m an only child, of the female variety, so neither my mother nor I had any experience with boys. We didn’t understand them, and were pretty convinced that the aforementioned baby would have to be a girl.

Then they were boys…

5 years apart they were both boys. God’s funny that way, right? I was convinced that when my first son was born that it might have been some kind of cruel joke. What was I going to do with a boy? With all of the little sports onsies, tiny baseball caps, and overalls?

I wish I’d known how great it would be.

I wish I’d known how much fun it would be to play in the dirt. To button up little plaid shirts, roll up the cuffs of some jeans, and put tiny sneakers on to go to church, without frilly dresses and tights.

I wish I’d known potty training wouldn’t be the nightmare I thought it would be. That they’d be rough, fall down the stairs, yank out a tooth and laugh about it. Or how they’d fall asleep on the couch with me watching Harry Potter, and I would wish they could stay that little forever.

I wish I’d known that, while it would be hard to fight people when they didn’t act the way culture tells them boys should act, it would be worth it. That I would be raising them to be whole people, not media portrayals of boys. That they would love Nerf guns, and Pokemon, and Super heroes, but they would also love My Little Ponies, Princess movies, and singing along to “girl power” songs on the radio.

Being a mom of boys has been such a blessing, even when its hard. I cringe when I hear things come crashing to the ground, or when one comes in crying because his brother hit him. I have given in on more violence in video games than I ever said I would. I’ve not been as patient as I should have been. I’ve let them sleep in their clothes and go to school in those same jeans, because we all woke up late. And we forgive each other, and try again.

I wish I’d known that having boys would be amazing, and now that I do, let the adventure continue.

Life as I know it

6 thoughts on “Then They Were Boys…”